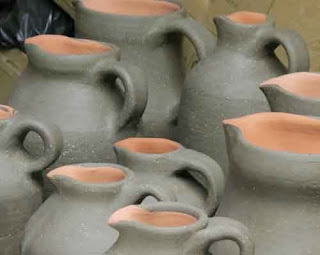 I've got the current batch of jugs ready for firing in the wood kiln, all the handles joined on and the raw glaze applied to the insides. All they have to do now is dry out, which isn't going to happen in this weather. But I'll be firing the old electric kiln with a batch of shiny brown beakers, so the waste heat from that can be used.
These jugs have sturdy shapes and hark back to "pitchers", simple peasant pots that were functional.
They are only glazed on the inside to save wasting expensive materials. 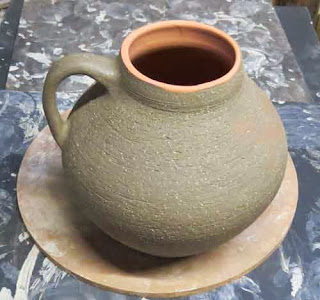 Pine resin was also used to waterproof pottery jugs, when times were hard! Hopefully I can find people willing to pay for the glaze!
I also made a larger jar, which I have turned the surface off of to reveal the heavily grogged texture, which I rather admire. The aim is to get the wood ash to react with the surface and form a pleasing result.

But now for some work getting ready for this weekend's festive offering by the Upwey Potters. I'll probably spend more time making mince pies than selling pots! 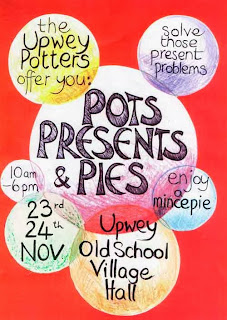 Posted by Bill Crumbleholme at 4:33 pm